Local New Bern author and former elementary teacher, Jo Anna Dressler Kloster, is taking her novel, Lily Unleashed, on the road around North Carolina. She is coordinating with local rescues and shelters to spread the word about the cruel industry of commercial dog breeding and how it negatively affects communities.

“From my research and work with agencies dedicated to ending puppy mills,” says Kloster, “I‘ve learned it’s truly a consumer protection issue: too many puppies come in with parvo and other contagious diseases that can cost pet parents hundreds if not thousands of dollars in unplanned vet bills, and then there are the deceptive sales and lending practices by lending agencies that charge exorbitant fees for a missed payment and end up costing many times the price of the dog. The Humane Society of the US has a pending lawsuit against Lending USA, which charges outrageous interest rates. According to official documents, a customer in Florida who purchased a puppy for $3,500 from a pet store, would have ended up paying $25,655 for the dog over the period of the contract.

The novel was inspired by her puppy mill survivor Cagney. He was living in a Wisconsin Amish puppy mill and then rescued by the Northcentral Maltese Rescue of Racine WI at the Thorpe dog auction.

JoAnna and her husband, Patrick, worked to rehabilitate Cagney from the trauma of being locked in a cage 24/7 for the first seven months of his life. He was most likely a breeder male that didn’t produce, so his fate was better: he was auctioned off by his breeder and shepherded into a loving home.  Statistics confirm that this is not the case for thousands of breeder female dogs that languish in locked wire floored cages year-after-after year pumping out puppies until they are physically unable and then destroyed because of it.

Kloster’s novel materialized after writing sessions in her classroom. She modeled writing about a topic she knew well: Cagney’s behaviors. Her students had many questions about puppy mills and why dogs are allowed to be locked in cages without love or socialization and other basic needs of dogs.

After confirming that no book existed to tell this story, Ms. Kloster decided to take pen in hand and weave a story that would educate adolescents about this topic.

Lily Unleashed informs readers not only about how life in a puppy mill affects dogs but more importantly, readers learn what they can do to help end puppy mills. The book’s appendix has ideas for readers and teachers along with ideas on Kloster’s website, emptycagespress.com, under teacher resources.

Kloster created her own publishing company, Empty Cages Press, to brand the movement behind the novel. She hopes to take the message that “the time is now to end puppy mills by drying up the demand through education.” Her goal within the next year is to take this message to Raleigh when she’ll lobby elected officials that have the wherewithal to pass legislation making North Carolina the next great state to say NO to pet store puppies. Selling puppies in pet stores is no longer allowed in the following states: California, Washington, Maine, Maryland, and Illinois.

Kloster has been working on this book and this issue for over ten years.  She is a Humane Policy Volunteer Leader with the Humane Society of the United States and Bailing Out Benji. Both organizations are dedicated to ending puppy mills. Says Kloster, “Pet stores that sell puppies can easily convert to a more humane model – simply stop selling puppy mill puppies and bring in dogs from shelters and rescues. Your community will recognize you as a hero. Talk about a win-win situation. I have met more locals that refuse to shop at pet stores that sell puppies.  So the pet store owners would be doing themselves a favor as they’d have more customers if they’d simply convert to that humane model.”

Plans are in the works for book signings in Green Bay, WI, where the novel takes place in September to coincide with National Puppy Mill Survivor Day. Kloster also plans to coordinate visits with shelters in states that harbor the largest number of puppy mills like Missouri and Iowa. Social media is helping spread the word as well. 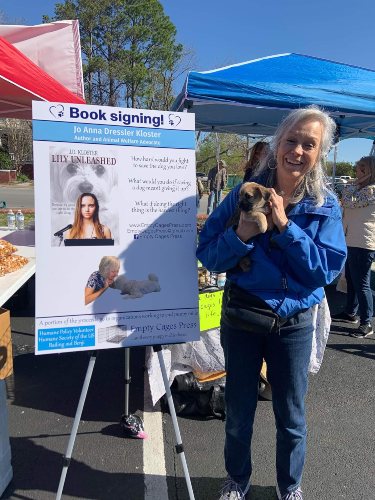 Kloster will be hosting a booth at the 2nd annual Friends of Craven County Sheriff’s Office (FOCCSO)  Expo Saturday, June 11 at Creekside Park, New Bern, 9 a.m. – 1 p.m. A portion of book proceeds benefit groups dedicated to ending puppy mills. Lily Unleashed is available at New Chapter Books and online in paperback and as an eBook at Amazon as well as Barnes and Noble.