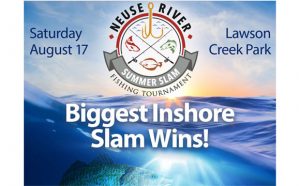 Heidi told us, “The students run the fishing tournament. It’s your chance to catch the big one! Catch a flounder, red fish, and a trout and the biggest amount of aggregated weight wins. The last two years, the top three teams have won money.”

Last year they had 15 teams, and everyone won a prize!

She also said, “Thankfully the businesses in Craven and Pamlico County have donated so we can put this on and have a successful tournament.”

“The girls are out there at 5 a.m., they’re checking boats, and measure the fish.”

“This past year we bought a Vertimax machine, which is a resistance weightlifting machine because of this tournament so that is helping our athletes get better. They’re great kids! They’re awesome in the classroom. They put student first, athlete second, and as a cumulative average they have a 4.28 GPA.”

Heidi said, “This is just a way to help us out and also we are also helping our community by getting people together.”

If you have a team of two, this is a great way to have fun and raise money for a great cause!

They’ll have a Captain’s meeting on August 16th with Moore’s BBQ.

This year’s Title Sponsor is Neuse River Bait and Tackle.

Heidi also invites everyone to come out and watch them play!

Check out their Facebook page for all the details!