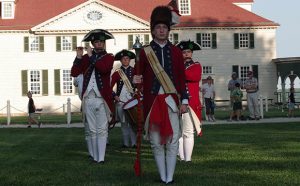 The Fifes and Drums Corps of York Town will be performing at Tryon Palace at 11:30 a.m. on Friday, July 19th, and we’d like to invite you to come and see us!

The Fifes and Drums of York Town was formed for the American Bicentennial Celebration in 1976. Today they continue their mission to recruit youth between the age of 10 and 18 and train them in the rudiments and drill of 18th Century field music.

A typical performance season consists of approximately 80 shows, many of which are conducted for the National Park Service and York County, as well as various historic venues along our Eastern seaboard including Mount Vernon, Washington D.C., Philadelphia and Valley Forge Pennsylvania, West Point, New York, and Boston, Massachusetts.

Our members dress in period uniforms. The goal of all members is to promote into the Senior Corps and wear the red regimental uniform reminiscent of the uniform worn by 18th century musicians who served in the Continental Army in Yorktown, Virginia…where Freedom was Won!

Submitted by: Elise E. Rose, Board Member of the Fifes and Drums Corps of York Town