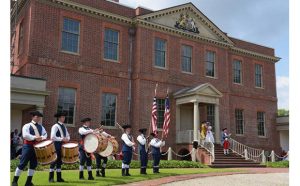 New Bern, NC – In 1783, North Carolina Governor Alexander Martin became the first American governor to issue a state order for celebrating the Fourth of July. Step back in time and attend one of our earliest celebrations of American independence at the Glorious Fourth at Tryon Palace, July 4, from 10 a.m. to 2 p.m.

Palace Grounds will be open for free for visitors between 10 a.m. and 2 p.m. There will be a reading of the Declaration of Independence done on the Palace front steps following the Fife and Drum Corps Parade down the main Allee at 11 a.m. The 1st North Carolina Regiment of the Continental Line will be on the South Lawn during the event and will perform a firing demonstration directly after the reading of the Declaration of Independence. Children will have a chance to practice using a quill pen to sign their own copy of the Declaration, and costumed historical interpreters will be roaming the grounds, engaging with visitors to share their views on American independence.

Tours of the Palace, historic buildings, and galleries in the North Carolina History Center are available with purchase of a One Day pass.