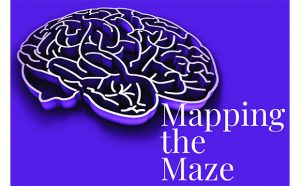 Public Invited to Presentation During Alzheimer’s and Brain Awareness Month

“Mapping the Maze” is being offered for those affected by Alzheimer’s and Dementia, their caregivers, and anyone interested in hearing more about this perplexing condition. Alzheimer’s and Dementia are brain disorders that make it hard to remember, think clearly, make decisions, or even control emotions. In the United States alone, more than 5 million individuals are living with Alzheimer’s and 16 million are serving as their unpaid caregivers. 1 in 3 seniors dies with Alzeimer’s or another dementia.

The program will feature presentations by various experts on the disorders, including the Alzheimer’s Association’s Susan Spivock Smith, PhD, CRNP on “Understanding Alzheimer’s and Dementia”. Dr. Smith will cover the basics of Alzheimer’s and dementia to provide a general overview for people who are facing a diagnosis as well as those who wish to be informed. Jay Reinstein will share his personal story on living with the disease in “My Journey with Alzheimer’s”. Jay is the former Assistant City Manager for the City of Fayetteville, NC, and was diagnosed last year with Younger-onset Alzheimer’s at the age of 57. Lastly, Byron Aguilar, PhD will discuss clinical research on the disease in “Innovation in Alzheimer’s Dementia Drug Discovery”.  Dr. Aguilar will summarize some of the challenges in drug therapy and discuss opportunities for future drug development.

“This disease is a global crisis that impacts many families right here in our community,” said Megan McGarvey, Director of Public Relations at CarolinaEast Health System. “We are proud to partner with the Alzheimer’s Association to bring some form of enlightenment on this difficult diagnosis that many may be struggling with in one way or another. We hope to help our community map the complicated maze that is this disease,” she added.

To register or for more information, call 252-633-8154 or visit Carolinaeasthealth.com/calendar.  Light refreshments provided.