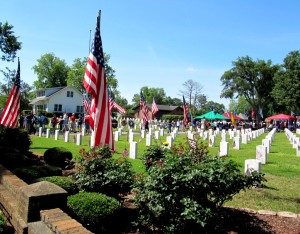 Some people think Memorial Day is a day to thank active duty, veterans, and retirees for their service. It’s not. To many, it’s a solemn day of remembrance of their fallen brothers and sisters who deserve to be recognized as they paid the ultimate sacrifice for our freedoms.

This Memorial Day let’s remember our loved ones and so many people who died for the freedoms that we have as Americans.

After serving almost 22 years as a Navy Hospital Corpsman, I’ve seen the light leave the eyes of fellow Sailors and Marines. My brother died when he was 24 while serving in the Army. They died protecting our freedoms. I believe they would expect more from Americans if they could see what’s happening in our Country today. We need to do better…if not for them, for ourselves and future generations.

The military was my second family – made up of people from all walks of life: races, religious beliefs, cultures…our differences were what made us stronger and united together. No matter where we served in the World, we relied on each other to have each other’s backs. Unity was vital to our mission. We followed rules because they were the foundation for successful missions. Sure, there were personal issues, but we worked through them and if we couldn’t, we at least agreed to disagree and we moved on to complete the mission.

We were taught that if there was a problem, don’t complain about it, come up with a solution.

During difficult, high stress environments, and/or life-threatening times, there was no time for arguing, self-pity, nor privilege or bluster. We did our job as a well oiled machine.

These are problems that are dividing our Country today. I think the biggest one is not listening or even caring to hear what others believe. Depending on where you get your news it may be totally opposite from the true story. It’s very important that we check our facts, especially when we see news alerts from social media platforms.

We will never find solutions to problems by alienating each other and not having face-to-face conversations with people who may not understand our points of view. We need to find common ground.

It’s about standing up for what is right vs. what you’re friends or your political party believe is right. We need to think for ourselves.

Everyone who joins the military has one thing in common, they must swear-in by repeating the enlisted or officer Oath.

Let Memorial Day 2019 be the restart to our way of thinking about respecting and listening to others, as our Nations fallen service members did before they died for our Country.

We are the United States pf America and it’s time for all of us to stop wishing we had more of whatever you feel you’re entitled to. Although our military has been underpaid, I haven’t met a service member who felt “entitled” when they signed the contract that could put them in harm’s way and possibly lead to their death as they were proud to serve!

Although you may not have served, there’s no reason why you can’t follow their example by being a Patriot for our Country and standing up for the right thing do so.