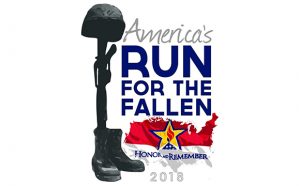 America’s Run for the Fallen, a five-month, cross county marathon honoring military personnel killed in the line of duty during the Global War on Terror is coming through New Bern.

“Run for The Fallen” – “To Individually Honor and Remember All Military Service Members Who Died during The War on Terror.”

On April 7, 2018 Honor and Remember Inc. initiated America’s Run for the Fallen, one of the most comprehensive fallen military tribute events ever organized. Trained marathon running teams cover one mile for each day a service member died in an organized tribute run from California to Arlington National Cemetery.

The Run calls attention to and specifically honor the men and women who have died during the War on Terror beginning with the USS Cole Oct 12, 2000. A rotating team of more than 400 active duty military and civilian members from throughout the nation embarked on a 19 state, 6100-mile journey to honor every fallen service member, numbering nearly 20,000. Each mile of the route is dedicated to individual heroes and their families, based on their chronological date of death. Carrying a full size American Flag, Honor and Remember Flag and Honor and Sacrifice Flag along with hero information, each relay team will stop at one-mile intervals in an apolitical reflection of remembrance of each service member. There they call each name out loud and deliver a short tribute for waiting Gold Star family members, friends, comrades and patriots. Covering approximately 50 miles per day, each day concludes with an ending ceremony at planned stopping points in local towns and communities. The goal of Run for the Fallen is to blaze a memorial trail across America recognizing every service member who died as a result of serving in the armed forces.

During the run though New Bern members of VFW Post 2514 and Axillary, DAV 40 and Axillary, American Legion Post 539, Military Order of Purple Heart #639, Twin River lion Club, and New Bern Lion’s Club are providing lunches, and other provisions for the runners and establishing the stop stations. An End of Run ceremony is scheduled for 6:pm at the 1st Christian Church, King and Brown St, Washington, NC where the names of the fallen are again read and the community is welcome to meet the runners.