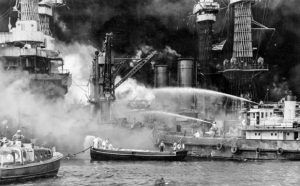 Ceremony to be held on Thursday, Dec. 7 at the N.C. History Center

Tryon Palace will commemorate the attack on Pearl Harbor with a remembrance ceremony on Thursday, Dec. 7 at 11 a.m. This free program is open to the public and will take place in the Cullman Performance Hall, located inside the North Carolina History Center.

This event commemorates the 76th anniversary of the day Japanese airplanes attacked the United States Naval Base at Pearl Harbor in 1941. More than 2,300 Americans died during the attack that officially began the United States’ involvement in World War II.

The program will include a color guard presentation from the Marine Corps League, Cherry Point Detachment, performances by the 2nd Marine Aircraft Wing Band, and a keynote address from retired Maj. Gen. Tom Braaten. A commemorative wreath will be displayed in Mattocks Hall, which is also located at the North Carolina History Center.

December 9: Seasons of Giving: A Candlelight Christmas Celebration (Night One)

December 11: Holiday Decor Behind the Scenes

December 12: Behind the Scenes: Conservation Lab

December 14: Christmas and Classics, A Concert by Pianist Sharyn Edwards