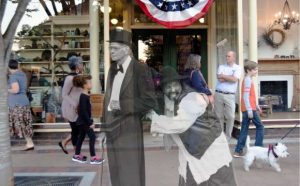 It is that time of year again, and the New Bern Historical Society is preparing its 27th annual Ghostwalk, Heroes & Hooligans… They Walk Among Us!. Each Ghostwalk brings a whole new batch of characters from New Bern’s colorful and varied past to tell you their stories right in the very places they might have been seen in life. Don’t worry though, all these spirits are from history, not from science fiction. So as night falls in New Bern’s Historic District October 26-28, keep an eye out for shady characters and good guys as well.

This year there will be 13 different ghost haunts in historic houses, churches and businesses, and of course in Cedar Grove Cemetery where candlelit paths will lead to plenty of eerie entertainment! If you dare pass under the weeping gates you will meet the cemetery’s famous grave diggers who will try to convince you to stay… forever. If you get past them, be on the lookout for the many ghostly characters whose lives shaped our city as they appear and disappear before your eyes.

New Bern’s two historic theatres will open their doors again with special performances. Expect a lighthearted mystery-comedy, featuring the Dowd family at the Attmore-Oliver House.  Of course, the Veri-Good Bakery itself will appear with lots of delicious goodies. Historic churches will also be ready with more hearty fare such as chili, pasta and hot dogs.

Tickets, available mid September, are $17 in advance and $22, the day of the event.  Special pricing for active duty military, their dependents and students, all with ID at $13.  Children 3-12 are $5 and under 3 free. Tickets will also be available on line at NewBernHistorical.org/ghostwalk . Check the website for complete outlet information, or call 252-638-8558. Title Sponsor, Chesnutt, Clemmons and Peacock. Media sponsorship provided by WITN  and Public Radio East.

The mission of the New Bern Historical Society is to celebrate and promote New Bern and its heritage through events and education.  Offices are located in the historic Attmore-Oliver House at 511 Broad Street in New Bern.  For more information, call 252-638-8558 or go visit NewBernHistorical.org or Facebook.com/NewBernHistoricalSociety.