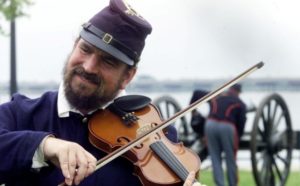 Simon Spalding returns to Trent River Coffee Company on Friday, March 10, presenting “St. Patrick & The Battle of New Bern”. The program combines songs and tunes from Ireland with music of the Civil War, commemorating both St. Patrick’s Day and the 155th Anniversary of the Battle of New Bern.

The Irish part of the program will include reel, jigs, and hornpipes on the fiddle, along with favorite Irish nautical ballads and sing-along sea chanteys.  It’s just the music to get you in the mood for St. Patrick’s Day!

The Civil War component of the concert will include patriotic songs, dance tunes, and satirical songs by Union and Confederate soldiers and sailors.  Simon will play fiddle and an original mid-19th-century fretless banjo, recreating the sounds of a century and a half ago.