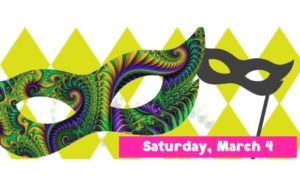 The parade will begin at 2pm, led by the 2nd Marine Aircraft Wing Band and the Mardi Gras King and Queen. Parade line-up for participants begins at noon on the 1400 block of Spencer Avenue, and the parade begins at 2pm. This year’s Mardi Gras and parade will feature the Craven Brass Quartet, the Antique Car Club, Unknown Tongues, and Jonkonnu.

After the parade, the festival will continue until 5pm on Spencer Avenue between Second and Fifth Streets, and will feature food, live music, performers, and vendors.

All ages are welcome and encouraged to dress in costume if desired. Groups interested in joining the parade must register to participate.