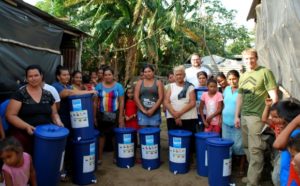 New Bern-based One Million Goal Inc. is celebrating a successful year of helping people gain access to clean, safe water and increasing awareness of the dire need for water around the globe.

One Million Goal’s mission is not to just provide water to those in need, but it is also to raise general awareness about the severity of the global water-shortage epidemic and the extensive, negative impact of this water crisis. A lack of clean drinking water – a fate known by nearly 1 in 10 people on the planet – is not just a thirst issue. Not having access to clean water also creates or exacerbates a host of other problems from widespread, preventable disease and hunger to poverty, gender inequality, a lack of childhood education, terrorism and sexual assault.

“Even with the seed, the soil and the sunshine, the miracle of life doesn’t begin until you add water,” Garret Biss says. “Fighting tyranny, poverty or disease will provide no enduring cure for suffering if we don’t first start by providing clean water.”

Consider these startling statistics from The Water Project:

Approximately 783 million people do not have access to clean and safe water worldwide.

Nearly 1 out of every 5 deaths of children under the age of 5 worldwide is due to a water-related disease.

Women and girls are responsible for water collection in seven out of ten households in 45 developing countries.

The average container for water collection in Africa, the jerry can, weighs more than 40 pounds when full – a load then carried by women and children for miles each day.

Just $30 is often enough to provide water for one person in need. According to the World Health Organization, every $1 invested in water and sanitation provides an economic return of between $3 and $34. In his efforts, Biss regularly speaks with audiences from school children to civic organizations and community leaders. As a self-proclaimed philanthropy activist, Biss not only addresses the importance of water to end all suffering, but he also promotes the need for service and charity as a foundation for every person and organization.

For more information about the global water crisis or to invite Biss to speak on this vital topic, visit OneMillionGoal.org.

About One Million Goal Inc.

One Million Goal Inc. is a North Carolina 501(c)(3) organization founded in 2014 by Marine Corps veteran Garret Biss. Its mission is to raise money and awareness in support of the global water effort and to complement the efforts of other organizations working to get water to those in need. To date, One Million Goal has worked to support multiple organizations to include: charity: water, Trashwater, Water.org and The Water Project.