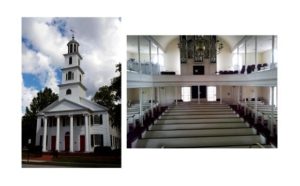 The First Presbyterian Church of New Bern, NC, celebrated (after a weather delay) the 200th anniversary of its founding on Wednesday, January 11, 2017 and kicked off a year-long commemoration of the church’s past, present and future.

“First Pres” as it is lovingly referred to by members and non-members alike had its formal organization in the parlor of Mrs. Elizabeth Minor on Craven Street near Pollock Street under the leadership of Rev. John Witherspoon with 13 original members. Rev. Witherspoon, a New Bern native, in addition to organizing First Presbyterian Church, New Bern organized or helped to organize First Presbyterian Churches in Raleigh, Greensboro and Bethlehem, NC.  Five years later, the New Bern church building, located at 400 New Street was dedicated.  A contemporary newspaper account stated that the structure was “. . . capable, by computation, of accommodating 800 persons.” Undertaking such an ambitious construction project by the founding members reflected a tremendous vision of faith and service to their community. The sanctuary they establish is recognized today as the oldest, continually operated church building in New Bern.

The Bicentennial Year will feature a variety of events, lectures, concerts and worship services to tell the inspirational history of First Presbyterian Church, New Bern and its outreach to the local community and to the world beyond. The celebration will culminate New Year’s Eve, Sunday, December 31, 2017 with a church-wide rededication to the vision of the founding members as the congregation moves forward to the next 200 years.