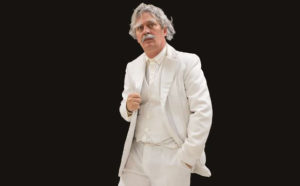 Wednesday, September 14 at the Chelsea

New Bern Historical Society will start its Lunch and Learn season with a bang, and with Bill Hand as Mark Twain. Appropriately, Mr. Clemens has sent notes on his upcoming presentation. Mr. Clemens has declared that, “on September 14, he will address the New Bern Historical Society’s “Lunch and Learn” on his own recollections of the Peculiar Institution.  Along with reminiscences of his youth, Mr. Clemens hopes to include a selection from Huckleberry Finn, a favorite ghost story, and the true story of a slave woman’s experience in New Bern – though he makes no promises. The trouble begins at 11:30am.”

Mr. Hand explains, “Mr. Clemens, better known as Mark Twain, was born in Florida, Missouri in 1835 and spent his childhood in Hannibal of the same state where slavery flourished. Though he was taught the “rightness” of the Peculiar Institution of slavery, he also learned a respect and admiration for the black race that never left him.”

Mr. Hand is a reporter, photographer and columnist for the New Bern Sun Journal.  He is active in local theatre, seen recently in the role of Willie Loman in Death of a Salesman at Rivertowne Players.  He also directed The Rainmaker at New Bern Civic Theatre.  Hand is writer and director for his own production company, Athens of the South Productions, that is known for its dinner theatre shows.  One of his favored projects is Ghostwalk for New Bern Historical Society where, for more than 20 years, he has directed the ghosts that materialize in Cedar Grove Cemetery. On more than one occasion, he has taken on ghostly roles himself.

Lunch & Learn starts at 11:30 a.m. at the Chelsea Restaurant, 335 Middle Street, New Bern. Tickets are $16 for Historical Society members and $18 for non-members; lunch is included. Tickets must be purchased in advance by calling the New Bern Historical Society at 252-638-8558, or can be ordered at NewBernHistorical.org. Lunch choices are Shrimp & Grits or Chicken Bruschetta with rice and green beans.