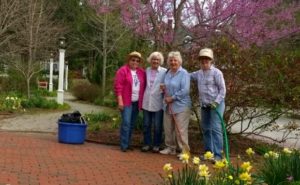 Even though we are well into the 21st century, you can take a walk through the 19th century in the New Bern Historical Society’s Heritage Garden.  Located behind the Attmore Oliver House at 511 Broad Street, this hidden treasure boasts blooms that would have been seen and enjoyed by our great, great grandparents.

The garden, which is open to the public, is lovingly cared for by a volunteer group headed by Annette Hunt.  She explains “All the plants in the garden are old plants, “pass along” plants that were popular the late 19th century.  We have the original plant list of Livinia Cole Roberts, whose husband brought the original spider lily bulbs to her from Japan. We also have paperwhites from Mrs. Blades’ garden.”  The heritage garden was begun in 2007 as a project to preserve some of the wonderful plantings that 19th century New Bernians cultivated.  Landscape architect Jack Draft and horticulturist Rebecca Lucas drew up the plans. You’ll find the volunteers working each Monday morning to keep the garden beautiful. The growing things flourishing in this oasis can’t be found at the local garden center.

The show presented by these wonderful plants is constantly changing.  New blooms appear each day. The collection includes 15 heritage roses. The public is invited to come and take a leisurely stroll enjoying this charming garden path tucked away between Broad and Pollack streets. A recent visitor sent a note. “Yesterday I followed the charming garden path to the Attmore-Oliver House.  What a lovely oasis!”

The mission of the New Bern Historical Society is to celebrate and promote New Bern and its heritage through events and education.  Offices are located in the historic Attmore Oliver House at 511 Broad Street in New Bern.  For more information, call 252-638-8558 or go to NewBernHistorical.org or Facebook.com/NewBernHistoricalSociety.