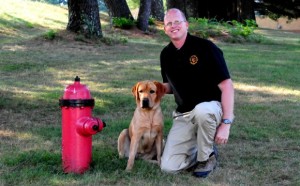 New Bern Fire Rescue is proud to introduce the newest member of its arson investigation team: K-9 Darby, an 18 month old Goldadore (half Golden Retriever/half Labrador). Darby will assist the department by sniffing out the causes of fires including any accelerants that may be used in cases of arson.

Darby and her handler, Fire Marshal Danny Hill, recently completed a five week canine-accelerant detection school sponsored by State Farm Insurance® and certified by the Maine Criminal Justice Academy. The State Farm ® Arson Dog Program is available to fire departments and law enforcement agencies across the U.S. and Canada and dates back to 1993. Today, more than 350 arson detection dogs are currently working in fire and law enforcement departments across the country and in Canada. Three of those dogs are working in North Carolina: at the Elizabeth City Fire Department (K-9 Ransom), Moore County Department of Public Safety (K-9 Friday), and New Bern Fire Rescue.

“We’re excited to have Darby and to put her to work here,” said Interim Fire Rescue Chief Bobby Boyd. “She extends the capabilities of the investigator. Darby’s scent-discriminating abilities are better than any equipment we can take to a fire scene when arson is suspected. Darby will lead the investigator to the location of the accelerant, so the investigator can take a sample and submit it to the state’s crime lab in order to prove arson. She will be a tremendous asset to our fire rescue department.”

According to the National Fire Protection Association (NFPA), more than 280,000 intentionally set fires per year were reported to local fire departments in the U.S. between 2007 and 2011. Associated annual losses included 420 deaths, nearly 1,400 civilian injuries, and $1.3 billion in property damage.

“We want to help support the efforts of New Bern Fire Rescue to douse arson fires in the area and put criminals behind bars,” said local State Farm Insurance® Agent Tom Gingrich. “The scope of arson goes beyond impacting insurance companies – it affects the personal and financial well-being of us all. Training dogs to detect accelerants at fire scenes saves time and money in arson investigations.”

Darby and Fire Marshal Hill will be available for demonstrations of their skills, as well as photos and interviews, on Wednesday, September 23rd at 2 p.m. at New Bern Fire Rescue Headquarters located at 1401 Neuse Boulevard. State Farm Insurance® Agent Tom Gingrich will also be available to talk about the dog training program.