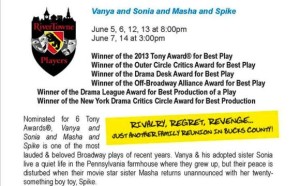 Nominated for six Tony Awards®, Vanya and Sonia and Masha and Spike is one of the most lauded and beloved Broadway plays of recent years. Vanya and his adopted sister Sonia live a quiet life in the Pennsylvania farmhouse where they grew up, but their peace is disturbed when their movie star sister Masha returns unannounced with her twenty-something boy toy, Spike. A weekend of rivalry, regret, and raucousness begins!

Submitted by: Kristine Marie on behalf of The Rivertowne Players