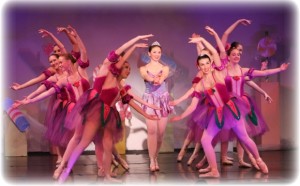 Eastern NC audiences will once again be treated to a wonderful ballet adventure with Down East Dance’s, The Nutcracker Ballet.

Written by Peter I. Tchaikovsky, the ballet was a commission by the Russian Imperial Opera Directorate based on the E.T.A. Hoffman story The Nutcracker and Mouse King. Tchaikovsky himself did not think much of his production but ballet-goers around the world have consistently acclaimed the work. For many the highlight of Christmas is hearing the beautiful tones of Tchaikovsky’s music as the snow begins to fall with the dancing Snowflakes or feeling the pure sweetness as they watch the Dance of the Sugar Plum Fairy performed by Kayce Meadows and Caroline Tyndall.

Be greeted by sounds of the season as you enter the Historic Athens Theatre to enjoy this year’s ballet production presented as a bedtime story for Marie, as told by her Mother. Join in the magical adventure that includes a grand Christmas party, twirling snowflakes, a nutcracker soldier, life-size mouse queen, and a journey to the Land of the Sweets with its beautiful Sugar Plum Fairy and its Waltzing Flowers.

Featured in this production are not only dance students of Down East Dance but also local talented performing artists. George Savitz, local actor will portray the role of Drosselmeyer. Jamie Wetherington, member of The Green Grass Cloggers, returns in the role of Mr. Silverhaus with Suzannah Cockerille as Mrs. Silverhaus. Portraying the role of the Nutcracker Soldier is Down East Dance Alumna, Austin Nielsen. Julee Anderson & Katherine Morris perform the role of Mother/Narrator.

Tickets for The Nutcracker Ballet are $12 for Adults, $10 for Youth. (12 and under) and are available at New Bern Civic Theatre.

Contact NBCT’s Box Office’ at 252-633-0567 for box office hours or at NewBernCivicTheatre.org for online ticket purchases.

Share the magic with your family and friends this holiday season!