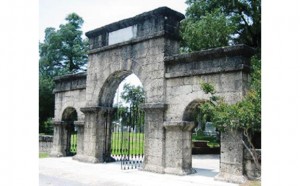 Spring tours at historic Cedar Grove Cemetery have resumed.  The tours are offered each Saturday at 4 p.m. April through November as part on an ongoing effort to promote preservation of the Cemetery, which is listed on the National Register of Historic Places.

Established in 1799, Cedar Grove Cemetery contains more than 1000 marked graves.  Some of the earliest “residents” fought in the American Revolution, and the cemetery abounds in grave-sites of Confederate soldiers. Others buried at Cedar Grove were artists, educators and politicians who played key roles in the early North Carolina history.

In the past year, the Earl of Craven Questers partnered with the City of New Bern on two major projects – landscaping of the Confederate Memorial and repair of the main entry to the Cemetery, the so-called “weeping arch.” The later project was supported in large part by a grant from the Harold H. Bate Foundation.  The Questers also underwrote replacement of a wooden roof on one of the cemetery’s historic grave houses.

Tours begin at 4 p.m. each Saturday at the weeping arch on Queen Street.  Tickets may be purchased in advance at the New Bern History Society or at the tour site. The cost is $10, with all proceeds going to preservation work at the Cemetery.  For further information call 252-635-1374.