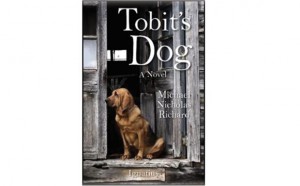 The beautiful and timeless biblical story of Tobit is given a fresh new take in a recently released novel from Ignatius Press, Tobit’s Dog by Michael Nicholas Richard. Tobit’s Dog tells the story of a humble man named Tobit Messenger, who despite the ever-present oppression of the Jim Crow South around him, becomes a prosperous and well-respected man. One day forces beyond his control start a cascade of misfortune that leaves him blind and nearly destitute. It is then that an affable traveling musician, who calls himself Ace Redbone, shows up on his doorstep claiming to be a distant relative.

In an effort to alleviate his family’s dire situation, Tobit allows his son, Tobias, to accompany Ace Redbone on a quest to collect a long overdue debt. Together, Ace, Tobias, and a most peculiar dog named Okra set off on a journey that will lead to unexpected consequences. Currents of grace begin rippling through not only Tobit’s family but his entire community as hidden crimes are revealed and justice, which had almost been despaired of, is served.

This retelling of the biblical story of Tobit, set in North Carolina during the Depression, brings to life in surprising ways the beloved Old Testament characters, including the important but often overlooked family dog. In Tobit’s Dog, important themes such as faith, prejudice, and suffering are explored and the novel compels readers to ponder thought provoking questions about these important topics.

Author Michael Nicholas Richard explains why he decided to re-tell the classic biblical story, saying, “Language and our perception of reality are ever evolving and changing things. Even great truths can become stale in expression. We should always be seeking to express these truths in new ways. We risk losing some of each generation who cannot see the truth behind what feels, to them, to be tired clichés.”

Dr. Peter Kreeft, professor of philosophy at Boston College and author of the book Jacob’s Ladder, says, “Sheldon Vanauken, author of A Severe Mercy (which is indeed a masterpiece), gave me the best compliment I ever received from an author when he told me that one of my books was on his bookcase. He lived monastically in a one room cottage with one bookcase, and whenever he kept a new book he had to throw out an old one. If I were living in his house, Tobit’s Dog would be one of the books I’d keep, to read again in a few years. That applies to about 1 out of 100 of the books I read.”

Kreeft continues, “What’s so good about Tobit’s Dog? Richard’s transparent writing style gives us a charming story and a strong theme, with realistic, convincing characters that we care about, who exhibit genuine love and gentleness in a challenging culture. It’s a believable story whose characters we know are real from our own experience, even though they are mostly of another time. This book would make a great movie!”
James Casper, author of Everywhere in Chains, calls Tobit’s Dog “a sturdy tale in the journey genre, with hope, love, faithfulness, and spirituality wrapped into it. An ancient story retold and repopulated in a fresh and vibrant manner, it is a praiseworthy contribution to possibly America’s most unsung and yet important literary cultures, anchored in the fiction of Walker Percy and Flannery O’Connor.”

Michael Nicholas Richard lives with his wife, Sherri, in New Bern, North Carolina. He draws inspiration for most of his work from the historical graveyards, churches, and stories from his hometown. Michael has two grown daughters, two young grandchildren as well as two dogs. The dogs never ask for money, but the daughters and grandchildren don’t shed. They are all allowed on the couch.

Richard is the author of the novel, Bogfoke, and a number of short stories in small press and mass market paperback formats.