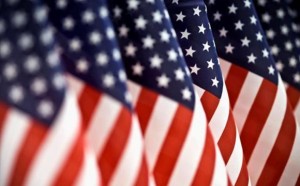 The public is cordially invited to attend the Annual Flag Day Celebration, presented by Elks Lodge #764, set for Saturday, June 14, 2014, beginning at 11 AM at the Gazebo at Union Point Park. Again this year the 2nd Marine Aircraft Wing Band from MCAS Cherry Point will provide the musical accompaniment that adds so much to the presentation of the glorious history of our national emblem. The public is invited to attend free of charge. An annual event on the Elks calendar, the celebration features flags from the earliest days of the revolution to the current day, complimented by appropriate patriotic music.

Also assisting in telling the great story of our flags will be the New Bern chapter of the Young Marines, and the Color Guard from the New Bern High School Naval Junior ROTC unit.

The 2nd MAW Band, under the direction of CWO4 Benjamin J. Bartholomew, consists of 51 Marine Musicians and is a highly trained and versatile musical organization. The band is capable of performing in a multitude of settings, ranging from its primary mission as a ceremonial unit, to other ensembles such as the Concert Band, Jazz Band or Big Band, and several other ensembles.  In addition to its duties at MCAS Cherry Point, the band appears in a wide variety of venues, locally, regionally, nationally and internationally.

Everyone is encouraged to attend this June 14 celebration, hear the outstanding music of the Marine band and help honor our glorious flag on its national holiday.  As Park seating is limited, all who are attending are free to bring their own chairs.  For further information about the Flag Day event, contact John Serumgard, event chair at (252)-633-2119.