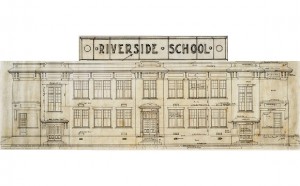 According to Peter Sandbeck, Riverside Elementary School on North Pasteur Street was built in the early 1920s in the Spanish Colonial-style brick and designed by Leslie N. Boney, Sr. and J. F. Gause of Wilmington, North Carolina. It operated until the mid 1970s and was later home to the Dane School and most recently to the Ephesus Seventh Day Adventist Church. It is now available for sale. It was the sister school of the Ghent School on Rhem Avenue later known as the Eleanor Marshall School which was demolished in the 1980s.

The homecoming program will include recognition of former principals, teachers, and staff as well as musical entertainment and will also feature Flavius Bennett (F. B.) Hall, Jr., a New Bern native and a former Riverside School student, artist, teacher, and author, who will talk about “Growing up in New Bern in the 1950s and 1960s” and Tim Thompson, a Riverside resident, historian, and chairman of the New Bern Historic Preservation Commission, who will talk about the “Hidden History of Riverside.” It will be a time for everyone to visit, enjoy a delicious meal, and share memories, photos, and memorabilia of their days at Riverside Elementary School. Miss Janet J. Latham, a New Bern native, Riverside resident, and artist, is serving as Honorary Event Chair.

The schedule for the day:

11 am to 12 Noon: Meet and Greet at the National Guard Armory

12 noon to 1 pm: A Southern School Luncheon compliments of The Family History Society of Eastern North Carolina at the National Guard Armory

Please let all of your family and friends know about the event. It is open to all those who have an interest in the historic Riverside School and the surrounding neighborhoods. The event is being presented in partnership with The Family History Society of Eastern North Carolina in support of The Heritage Park Project on Pollock Street next to City Hall.