Fifteen years ago hardly anyone thought about how to recycle computers or other electronics. Those who did may not have even known about the importance of keeping toxic heavy metals out of our landfills, or the fact that 98 percent of the materials in computers can be recovered and reused for a sustainable economy.

Ten years ago computer and electronic wastes in general were starting to enter the public consciousness. Dell Computer sponsored the first urban recycling drives in a dozen major cities, including one in Atlanta that collected several semi trailer loads of electronics. These early recycling events were so popular they frequently caused major traffic backups onto the local interstates!

Five years ago it was becoming a lot easier to recycle your electronics. Numerous larger cities were sponsoring annual or even monthly recycling events, and a handful of municipal recycling centers were accepting electronics. Awareness was also growing of the fact that most of the equipment picked up for ‘recycling’ was actually being exported to third world countries, causing harm to local people and their environment. In 2008 this was documented by 60 Minutes in this shocking expose. 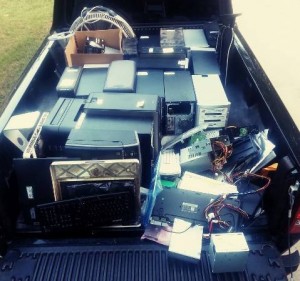 Today, you can take advantage of numerous electronics recycling events at churches, schools, neighborhood associations etc., which offer competing opportunities to dump your toxic trash at no apparent cost. Paradoxically, as it has become easier to recycle old computers, people have become more cautious. The export of e-waste to the developing world is continuing. Worse still, people have become acutely aware of their ‘digital identity’ stored on hard drives and even smart phones, and are reluctant to drop them off at a public recycling center with no control over their information.

At Zentech all hard drives we recycle will be either data-wiped or physically shredded. All cell phones will be physically destroyed to protect your privacy. We make sure that your personal information does not travel any further than our recycling center. Zentech also only uses downstream processors who are R2/RIOS Certified. These certification standards are still emerging and have room for improvement, but they are the standard for government agencies, Fortune 500 companies, and retail outlets such as Best Buy and Staples who have set up responsible collection systems. We also have expertise in dealing with the requirements of the HIPAA Privacy Rule for equipment recycled from the medical business.

Here in North Carolina most electronics have been banned from landfills since 2011, so unless you have lots of extra closet or warehouse space, sooner or later something will need to be done with these items. Drop us a line, we’d love to help!

For further information please visit us at www.zentech.org, on Facebook at www.facebook.com/NewBernSustainability or just give us a call at 252-649-2457.