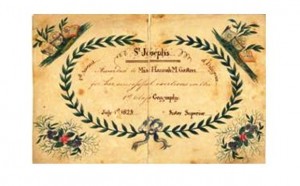 Photo Caption: This certificate was awarded to Hannah M. Gaston on July 1, 1823 for excellence and “successful exertions” in the subject of Geography. Hannah was one of two daughters born to William Gaston and his second wife, Hannah McClure.

Historical documents donated to the Tryon Palace Collection paint an intimate portrait of Judge William J. Gaston (1778-1844) and his descendants, including those who share lineage with Palace architect John Hawks (1731-1790).  These documents are now available for the first time as valuable research tools, offering vast new opportunities for exploration of this significant New Bern and North Carolina figure.

Donated by a direct descendant of Judge Gaston and John Hawks, this collection sheds light on the private lives and historical legacies of William Gaston and his family. Born in New Bern, Gaston is best known for his service as a U.S. Senator and Supreme Court judge, but he is further recognized for his time as a North Carolina legislator and New Bern lawyer. His father, Alexander Gaston, described in the collection as an “Irish gentleman of letters,” was a noted New Bern physician, and his mother, Margaret Sharpe, was an English immigrant from a family of devout Catholics.

The collection includes descriptive accounts of Alexander and Margaret Gaston, a manuscript diagram of the family line, handwritten and typescript narratives of the family’s history, and late 19th and early 20th century correspondence between Gaston descendants.

The bulk of the collection consists of nearly 150 letters exchanged between William Gaston and his youngest daughter Catherine Jane. Gaston split his time between his family and law practice in New Bern and his public responsibilities in Raleigh, serving a total of four terms in the North Carolina Senate, seven terms in the North Carolina House of Commons, and 11 years as an associate justice of the North Carolina Supreme Court. As a result, many of the letters are written while young “Kate” was studying at the Ladies Academy of the Visitation in Georgetown or at home in New Bern and while Judge Gaston was temporarily residing in Raleigh. The letters span 1827 to literally days before his death in January 1844.

The letters chronicle a young girl’s transition into adulthood and an attentive father who conveys his values and seeks to shape his daughter’s character. Though this collection corresponds with other manuscripts related to the career of Judge Gaston, it provides an intimate picture previously unknown to scholars.

Tryon Palace is pleased to help realize the donor’s wish that these letters and the other Gaston and Hawks family materials be preserved and made publicly accessible. For more information on the William Gaston/John Hawks papers or to schedule an appointment, please contact Kyna Herzinger at 252-639-3537.