UPDATE: This event has been cancelled, stay tuned for the next BBQ!

If you haven’t heard, New Bern Now has been having a great time hosting fun, Community BBQ lunches for the past year by inviting our Facebook friends. We’re happy to announce that we’re extending the invitation to New Bern Now’s visitors.

When we started out, we wanted to create an atmosphere for people to meet new people and see old friends while enjoying lunch. Although it’s a great way to meet new people…it is not a business networking event as people from all walks of life come out to meet others.

Our first venture was on a dirt road next to a beaver dam in the Croatan National Forest. I was very surprised that 15 people showed up and a few of them brought food. It was nice to meet people that I’ve only communicated with thru emails or on Facebook (FB). It was a hot July day and I didn’t plan properly as there was no shade. It really didn’t matter as everyone seemed to have a good time and came back for the next one. 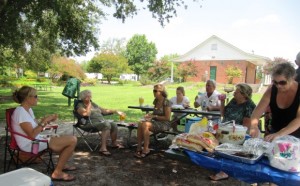 We really wanted to shine the light on New Bern and Craven County Parks so the BBQs continued at various places to include Glenburnie Park and Union Point Park. When the Isaac Taylor Garden opened, we hosted the last one there, as the Isaac Taylor House is NBN’s corporate office.

We decided to put out a donation jar for people to write down their favorite local charity and donate a dollar. Before we knew it, people were donating much more to include $20 bills. All the money went to the local charity that was drawn at the end of each BBQ.

We grill Buffalo wings and hotdogs (chicken or beef) along with other things. Join us for some pulled pork, coleslaw, and other fixings. We’ve been pleasantly surprised as some people contribute their special dishes for everyone to enjoy.

You don’t have to donate or bring anything – except for your own beverage. It’s a free community gathering. People show up in business attire to casual wear to include shorts and t-shirts. We don’t have any rules and you won’t see any cliques as people seem to mingle with everyone.

The only request is to let us know if you’re joining us by responding on New Bern Now’s Facebook page, sending us an email, or calling 252-638-6858. We want to make sure we have enough food for everyone!

We’re looking forward to seeing you for the next BBQ. Date to be determined soon!