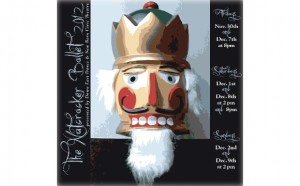 Presented by Down East Dance

Take a break from the holiday rush and enter the magical world of the Nutcracker.

Performance dates: Fridays – November 30 and December 7 at 8pm, Saturdays – December 1 and 8 at 2pm and 8pm, and Sundays – December 2 and 9 at 2pm at the Historic Athens Theatre, Downtown New Bern.

Written by Peter I. Tchaikovsky, the ballet was a commission by the Russian Imperial Opera Directorate based on the E.T.A. Hoffman story The Nutcracker and Mouse King. Tchaikovsky himself did not think much of his production but ballet-goers around the world have consistently acclaimed the work. For many the highlight of Christmas is hearing the beautiful tones of Tchaikovsky’s music as the snow begins to fall with the dancing Snowflakes or feeling the pure sweetness as they watch the Dance of the Sugar Plum Fairy.

Be greeted by Christmas Carolers as you enter the Historic Athens Theatre to enjoy this year’s ballet production presented as a bedtime story for Marie, as told by her Mother. Join in the magical adventure that includes a grand Christmas party, twirling snowflakes, a nutcracker soldier, life-size mouse queen, and a journey to the Land of the Sweets with its beautiful Sugar Plum Fairy and its Waltzing Flowers.

Tickets for The Nutcracker are $12 for Adults, $10 for Youth (12 and under). All general seating is available at New Bern Civic Theatre.

Share the magic with your family this holiday season!

For more information about the Nutcracker Ballet performance, contact Down East Dance Studio at 252-633-9622