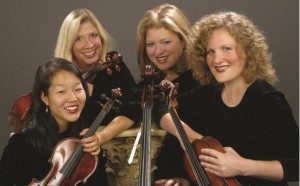 The next Music Among Friends installment of the Tryon Palace Performing Arts Series features the Cavani String Quartet on October 19, 2012 in the Cullman Hall of the North Carolina History Center. Since winning the nation’s highest chamber music competition, the Naumberg competition, and attaining residency at the Cleveland Institute, one of America’s top music schools, the Cavani String Quartet has become famous for its dynamic, irresistible presence on stage. The Washington Post has called them “completely engrossing, powerful, and elegant.”

The theme of the concert at Cullman Hall is “The Art of Listening,” and it will feature music of Joaquin Turina, The Bullfighters Prayer, Bela Bartok’s String Quartet No 1 and Robert Schumann’s String Quartet in A Minor Opus 41 No 1. Doors will open at 6:30 pm, meet the artist at 6:45 pm, concert begins at 7:30.

The Cavani String Quartet performs in major series and festivals throughout North America and Europe. They have been featured on NPR and NBC, CBS, ABC, and PBS television and they are recipients of the Guarneri String Quartet Residency Award from Chamber Music America.

Ticket prices are $25 general admission, $20 for Tryon Palace Council of Friends members and Active Military, and $10 for students with ID. Reserve your tickets by calling 252-639-3524. Tickets are also available at the Tryon Palace Main Ticket Desk in the North Carolina History Center and on the evening of the concert.