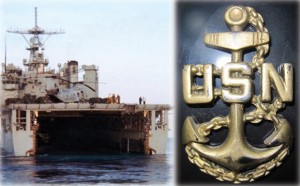 Imagine leaving home as a teenager and joining the United States Navy.

Everyone has their reasons, some want to leave small town life, others want to see the World or get a higher education. Whatever your reason, you may not think about the consequences. When you lived at home with your parents’, chances were, you probably had absolute freedom.

In boot camp, any freedoms you thought you had were pulled out from under you. You marched in unison, took special care to make your racks (beds), fold your clothes along with being told when to walk, talk, eat, and many other necessities that you took for granted before you enlisted.

Then you moved on to your “C” school or first duty station. You were still considered a “boot” until you earned respect from your peers and officers. You answered to the “Chief”, the senior Enlisted Leader who could either make or break your career. The Chief molded Junior Officers and was the liaison between you and Senior Officers.

You worked hard and eventually climbed the ranks trying your best to keep your distance from trouble. This could be very difficult because you’re taught to look out for your shipmates. You may encounter trying times when you see a shipmate doing something they shouldn’t be doing and you come to their rescue. In the long run, you may end up being taken back to your ship escorted by Shore Patrol. The only thing you’re guilty of is being in the wrong place at the wrong time and it could impact your entire career. That’s when your Chief steps in and vouches for you if they know you were doing the best to help your shipmate and you were an innocent bystander.

Before you know it, you are taking the advancement test for Chief Petty Officer. You may think you know everything going into the exam. Then it hits you. It’s easy taking orders, but are you prepared for the responsibility to actually be “The Chief”?

The results come out and you are on the “selection list” and you become a “Selectee”. You will have to participate in what’s now know as a “Chief’s Induction” to become a “Chief” vs. an E7.

I’m not sure what the “Induction” consists of as I had the pleasure of being “Initiated” on a ship oversees.  Actually, our “Chief’s Pinning Ceremony” was extended for the first time in history from September 16, 2001 to September 21 due to 9-11-2011. It was not a time to celebrate, as it was a time of great sorrow as our Nation was devastated by the cowardly acts of terrorists.

The chief’s pinning ceremony is a special Navy tradition, dating to 1893, when the Chief Petty Officer pay grade was created.

Today, I would like to congratulate all the new Navy Chief’s. Remember where you came from and everyone who helped you accomplish your ambitions along the way. I wish you the best in your future endeavors!