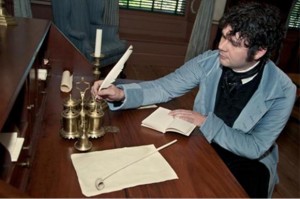 Pack a picnic and join your family and friends for this always popular concert on the beautiful South Lawn overlooking the Trent River.  Please bring your own chairs and blankets, but leave pets and alcoholic beverages at home.

Venezuelan Don Francisco de Miranda — champion of Spanish-American freedom, international traveler, adventurer and Casanova — visited the Carolinas in 1783 while on the run from the Spanish government. Miranda has been called the American Casanova by scholars not only for his way with women but also because of his love affair with America, her people, and its ways and laws. This original production, based on Miranda’s own diaries, provides a unique look at life in our fledgling country, from how New Bern celebrated the end of the Revolution to how citizens went along everyday life.

$6 per adult, $3 per student; free with regular admission.