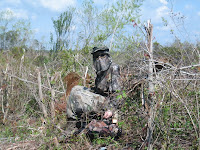 This is my first “wild turkey” hunting season without my big sister driving down from Western NY.

My sister, aka “Darlene”, has been my “Confidence Factor”. Without her, I’ve never been alone in the Croatan National Forest for 24/7 for an entire week. She introduced me to this addicting sport of turkey hunting in 2002. I have yet to bag a turkey (they’re smarter than me)!

I’m not much of a hunter; it’s always been about pitching a tent in the middle of the Croatan and trying to stay still for hours on end until it’s time to go back to camp.

Before she comes down from Western NY (Grand Island), I trek throughout the Croatan searching for any sign of turkey and a place to camp. I usually see turkeys when I’m scouting (2-3 weeks prior to hunting season). They are even bold enough to walk in front of my vehicle! 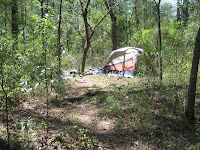 Ask most turkey hunters, when it comes “opening day” there’s no sign of this prehistoric creature!

As I think about spending seven days alone in the middle of the forest (not a designated campsite), I’m a little nervous. I think this is a female trait, I say that because men that I’ve interviewed don’t seem to be afraid of anything, at least that’s what they say!

During Darlene’s first night in NC a few years ago, we woke up to fresh bear scat. I wasn’t too concerned because my sister was with me and the black bear only cares about food and doesn’t usually attack people. But if I was alone, I would’ve probably left the next day!

Why am I hesitant (ok, a little scared) of the black bear? Because my sister and I have been charged by “human conditioned” black bears in Allegany State Park, NY.

Maybe I need a hypnotist or maybe a couple of you, would like to join me on a camping/turkey hunting expedition! We can make it a New Bern Now Turkey Expedition! Let me know if you’re game!