What does dueling have to do with New Bern? Scroll down, and along the way, here is your In the Now to start your week.

Tonight, a chance of showers before 8 p.m. Mostly cloudy, with a low around 69. South wind around 8 mph. The chance of precipitation is 30%. New precipitation amounts of less than a tenth of an inch possible.

Tuesday, a slight chance of showers and thunderstorms after 2 p.m. Mostly sunny, with a high near 91. Southwest wind 8 to 13 mph, with gusts as high as 20 mph. The chance of precipitation is 20%.

Tuesday night, a slight chance of showers and thunderstorms. Mostly cloudy, with a low around 70. Southwest wind 7 to 9 mph. The chance of precipitation is 20%.

Iconic automobiles spanning the decades from the early to the late 1900s will be showcased in the Antique Automobile Club of America’s North Carolina Region Spring Meet to be held Saturday, May 8, in historic downtown New Bern, the second oldest municipality in the state and its first capital.

Scores of classic and exotic vehicles from throughout North Carolina have registered for the meet, according to Zach Simons, president of New Bern’s First Capital Chapter of the AACA which is hosting the event.

Entries include a 1924 Model T Tudor that has won more awards than any other vehicle in AACA competition, an AACA award-winning 1964 Corvette coupe powered by a 300 horsepower engine, and a 1947 Lincoln Continental Convertible that was the eighth off the assembly line and one of only 24 still in existence. Classic Ford Thunderbirds, Pontiac GTOs, Dodge Chargers, Studebaker Golden Hawks, MGs and various other American and foreign marques will also be featured.

Car enthusiasts from throughout the state are expected to turn out for the meet, which is free to the public and will be staged on sections of Middle and Pollock streets in the heart of the historic district. The show field is adjacent to the Pepsi Store and within walking distance of such popular attractions as the farmer’s market, Mitchell Hardware, the North Carolina History Center and Tryon Palace, the residence of two royal governors. Show vehicles will begin entering the display area at 8 a.m., judging will commence at noon followed by the presentation of awards at 3 p.m. at the intersection of Pollock and Middle streets.

Via North Carolina Department of Natural and Cultural Resources. 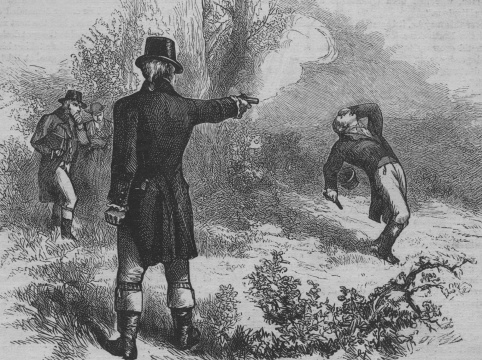 On May 3, 1856, the last recorded duel among North Carolinians, and one of the last duels in the South, was fought. Joseph Flanner and William Crawford Wilkings, both of Wilmington, battled just across the border in South Carolina. The duel resulted in Wilkings’ death.

The practice reached its peak of notoriety in North Carolina with the Stanly-Spaight Duel in 1802 in New Bern in which John Stanly killed former governor Richard Dobbs Spaight. The General Assembly reacted to the incident by banning dueling. The law was largely unenforced, and the state’s political elites continuing to use duels to resolve rivalries into the second half of the 19th century.

Gradually though, public opinion began to shift against duels and the practice faded into history. Read more about dueling on NCpedia.

Be aware, not afraid

Coyote sightings peak in May as they ramp up their activity searching day and night for food to support their newborn pups. Spring is pup rearing season; stay diligent and know the deterrents…more: https://www.ncwildlife.org/News/coyote-pupping-season-is-here

The warm weather means more snakes will start to show up along trails, in the woods, crossing roads and in our yards. Wildlife diversity biologists at the N.C. Wildlife Resources Commission request that if you see a snake, do not be alarmed, do not kill it, give it plenty of room, and if you see a pine snake or rattlesnake, report it.

About 70% of snake bites occur when people try to kill or handle them. Some may become aggressive if agitated by a human or animal, but most will leave people alone if they aren’t bothered and are provided an escape route. Watching for snakes and giving them a wide berth is an effective habit for preventing snake bites…more: https://www.ncwildlife.org/News/snake-sightings-common-as-the-weather-warms