Good morning, New Bern Now readers. Do you like live entertainment? We know, it’s been a long time since COVID-19. But two outdoor concerts and a new theatrical production are coming up, so scroll down to find out more.

From the National Weather Service

A slight chance of showers, with thunderstorms also possible after 11 a.m. Partly sunny, with a high near 79. South wind 5 to 15 mph, with gusts as high as 22 mph. The chance of precipitation is 20%.

Wednesday night mostly clear, with a low around 39. Northwest wind 8 to 16 mph, with gusts as high as 21 mph.

Like all of New Bern, NBCT in the past 15 years has navigated through a recession, hurricanes, and now a global pandemic. More here.

From the North Carolina Department of Natural and Cultural Resources

After graduating and receiving a commission from the U.S. Naval Academy in 1957, Duke embarked on a career in the Air Force as a pilot. His dedication to aeronautics and advanced education at MIT made him an ideal candidate for NASA, which selected him and 18 others in April 1966 to form Astronaut Group Five.

During the Apollo 16 mission, Duke was the lunar module pilot alongside mission commander John Young and command module pilot Thomas K. Mattingly. On April 21, Duke and Young stepped out onto the lunar surface, becoming two of only 12 people ever to walk on the moon. They spent 71 hours in the Descartes Highlands, a rugged region of the moon.

In just over 20 hours of moonwalks, the pair carefully surveyed the moon’s surface, collected samples and deployed scientific equipment. Duke was one of nine North Carolina-born astronauts. 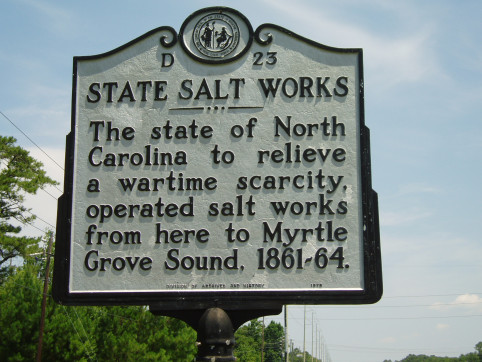 On April 21, 1864, the state salt works in New Hanover County were attacked by Federal forces and about a third of the site was destroyed.

An important ingredient for the preservation of the meat, salt was essential for the security of the food supply during the era. Salt works were established in Currituck County and near Morehead City, though both were captured by federal troops who controlled much of northeastern North Carolina by the end of 1863.

For the remainder of the war, state salt production was anchored in the Wilmington area, where numerous private salt works had previously been operated. The state brought 220 acres near Myrtle Grove Sound for its works, and soon began assembling the required furnaces. In November 1862, Governor Zebulon B. Vance reported 200 kettles in operation, producing 1,200 bushels of salt per day. At peak of production, the facility was putting out 8,500 bushels each day.

Late in the war Gen. W. H. C. Whiting, the Confederate commander at Fort Fisher, suspended state salt works operations in the Cape Fear region, and principal center of production shifted to the mountains of Virginia.