Three months after unveiling a new diesel and heavy equipment operator training facility, the VOLT Center campus is expanding again. Thanks to a partnership between the City of New Bern and Craven Community College, the City’s old Stormwater Maintenance Division building – and before that, its leaf and limb facility – has been fully renovated and is ready for reuse as a law enforcement training center. The building is located at 116 Rhem Street. 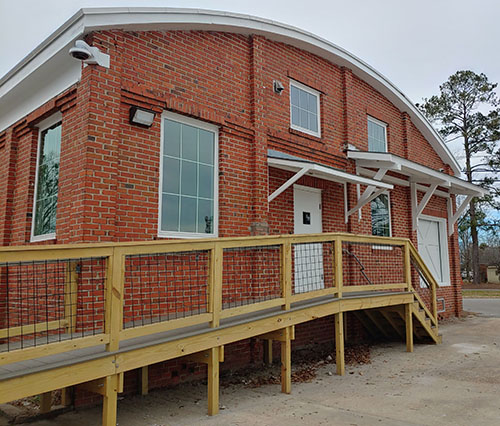 Public Works crews began working on the renovations in September 2020. They had significant work ahead of them: the ceiling was sagging, many of the old windows were damaged or broken, and the floor plan was not conducive to modern day office space or classrooms. On top of that, the 1960s era building was not handicap accessible. When crews began demolition inside the brick building, they were surprised to find beautiful arching trusses reinforcing the roof. “They were in great shape,” said Matt Montanye, Director of Public Works. “We admired them as long as possible before putting in new insulation and a new ceiling.”

The City hired Bruin Builders, LLC of New Bern to complete the renovation which included installing fiber connectivity, upgrading electrical wiring and features, building new walls and a new floor plan, and installing soundproofing materials for the building’s new use as a law enforcement training facility. City staff and Barnhill Contracting, LLC redesigned and repaved the parking area to allow for ten parking spaces and constructed a new ramp for easy access into the building. The renovations cost $242,000. The New Bern Police Department received funding from Carolina East Health System and the Harold H. Bate Foundation – both contributed $50,000 each – to offset the cost of renovations.

Later this month, a VirTra System virtual training simulator will be installed: a state-of-the-art training system that uses real-life imagery and scenarios to test a law enforcement officer’s response and their ability to deescalate tense situations. The simulator project represents a legacy of New Bern’s Chief of Police Toussaint E. Summers, Jr. “This idea started several years ago,” said Chief Summers. “We kept talking about what an asset a virtual system would be to train staff and to keep their skills sharp, while at the same time preparing and training the next generation of law enforcement. We never lost sight of our idea and how we could make it work.  It is bittersweet to see it come to fruition before I retire.”

Craven Community College will lease the simulator from VirTra and rent the facility from the City as part of a growing educational campus at the VOLT Center. Last month, City management staff, members of the New Bern Police Department, and community college leadership did a final walk-through of the building before the college received the keys. Registration for the first class of law enforcement students using the VirTra simulator will begin in March.

“This renovation presented some unique challenges for us,” said Matt Montanye. “We wanted to maintain the look of the building with all of its windows, but on the inside, we needed to create a very dark room for the simulator screens. So, we filled in the windows with darkening materials and soundproofed them to absorb the sirens and other mock scenario noises.”  The City decided to keep the old wooden sliding door on the east side of the building. It was used for loading and unloading materials and is a reminder of the history of the building.