The New Bern Historical Society’s Battlefield Park is the very appreciative beneficiary of the latest Eagle Scout Project. Eagle Scout candidate Jonathan Swimmer of New Bern Troop 13, Centenary Methodist, recently completed a service project as part of his requirements to achieve scouting’s highest rank, Eagle Scout. He planned and organized the construction of a bridge extension spanning a swampy area in the New Bern Battlefield Park which will allow visitors to safely traverse and see an important part of the Civil War battlefield. He raised funds and acquired materials needed for building the extension and he supervised a group of scouts in the construction phase. 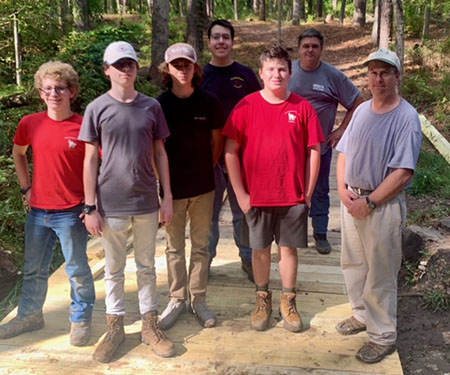 Battlefield Manager, Jon Miller is enthusiastic. “The work of Jonathan and this outstanding group of young men has resulted in expanding access to more of the park to visitors. This was a challenging project, and they did a wonderful job.”

New Bern Battlefield Park is owned and operated by the New Bern Historical Society. The Park is located about five miles south of New Bern, at 300 Battlefield Parkway, just off Hwy 70 at the entrance to the Taberna sub-division. This unique portion of the Civil War Battle of New Bern site is preserved in its original, natural state. The battlefield is open to the public and features a self-guided tour through the area on carefully placed paths.  For more information, call 252-638-8558 or NewBernHistorical.org.

The mission of the New Bern Historical Society is to celebrate and promote New Bern and its heritage through events and education.