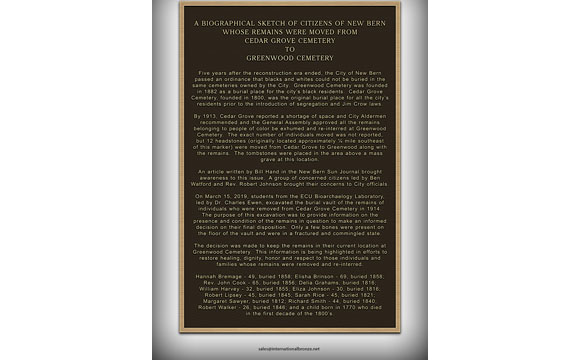 Thanks to a partnership of concerned citizens and the City of New Bern, two historical plaques are being placed in city cemeteries honoring the plight of at least a dozen African Americans who were disinterred from Cedar Grove Cemetery during the early 1900s.  A public ceremony and plaque placement honoring and restoring respect to these citizens is planned for February 29th at 1pm.  The ceremony will begin at St. Peter’s AME Zion Church located at 617 Queen Street.

In 2014, an article appeared in the New Bern Sun Journal newspaper recounting the story of several African Americans whose graves and remains were removed from Cedar Grove Cemetery in 1914 and re-interred in Greenwood Cemetery in order to make room for more whites. The article explains one of many laws that grew out of the Jim Crow era that banned African Americans from being buried at Cedar Grove.  The disinterred remains were taken to Greenwood Cemetery and buried in a mass grave near the entrance.

After the article appeared in the newspaper, a group of citizens led by Reverend Robert Johnson and Ben Watford approached the city with their concerns.  The City contacted Dr. Charles Ewen, Director of the Department of Anthropology at East Carolina University for assistance.  In March 2019, Dr. Ewen and a group of students from ECU’s Bioarcheology Laboratory excavated the mass grave at Greenwood.  They found only a few fractured bones and the remains were significantly commingled. Ben Watford and Reverend Johnson recommended the remains stay put at Greenwood.

Over several months, the City and the concerned citizens group discussed ways to honor, restore respect, and bring dignity to these citizens.  All involved supported the placement of two historical plaques, measuring two-feet by three-feet, to be installed near the entrances to both cemeteries.  Last month, the Board of Aldermen discussed funding for the plaques and a motion for approval passed unanimously.

“I would like to thank the City of New Bern and the Parks & Recreation Department for their assistance in making this project successful,” said Ben Watford.  “The staff have shown such empathy for this situation and we are grateful for their help to bring this day forward.”

Once the church ceremony is over, temporary plaques will be placed at each cemetery site. After the unveiling ceremony at Greenwood Cemetery, all are welcome to meet at the Omega Center, 800 Cedar Street, for the repast.

“This is the right thing to do to bring closure to a devastating situation,” said Reverend Robert Johnson. “We can finally put this matter and these citizens to rest. Through this process, we become better citizens who truly care about people. We can help restore healing for those who’ve been hurt by this situation. I am so happy to be a part of this team. We are making history for New Bern and beyond.”

The final plaques are expected to be delivered and installed in mid-March.

“It is difficult to find words when a tragedy such as this occurs,” said Mayor Dana Outlaw.  “What happened here out of indifference is now a place where all people can come together to mourn these New Bernians. It was our duty, as a City and a community, to make it right.”

All are welcome to attend Saturday’s events.