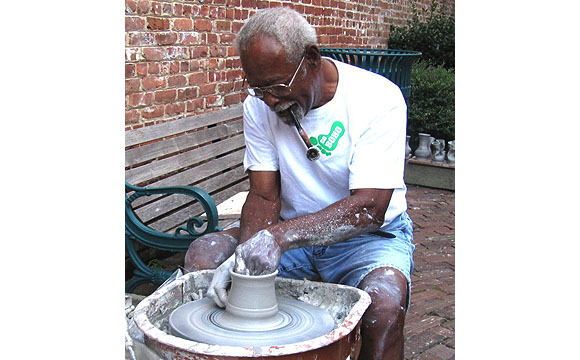 Ben will be present and discussing the History of the African Face Jug and how this tradition came to America.

It was in the Edgeﬁeld region of South Carolina that slave potters began to create face jugs. The story handed down by word of mouth from generation to generation was that in lieu of tombstones, slaves placed personal items on their loved ones’ graves along with face jugs.

Meanwhile, African slaves taken to the Caribbean adopted the voodoo religion; once in America, many converted to Christianity and merged their voodoo beliefs with a belief in the devil. Worship of ancestors, voodoo, and Christianity would then merge into the tradition of the face jug.

The “ugly face” jug came about as a result of the combined beliefs. Mr. Watford suspects that the face jug had to be ugly enough to scare the devil away from an ancestor’s grave so that his or her soul could rest and feel secure.

Face jugs made in the Carolinas continue to be among the most prized possessions of pottery collectors.