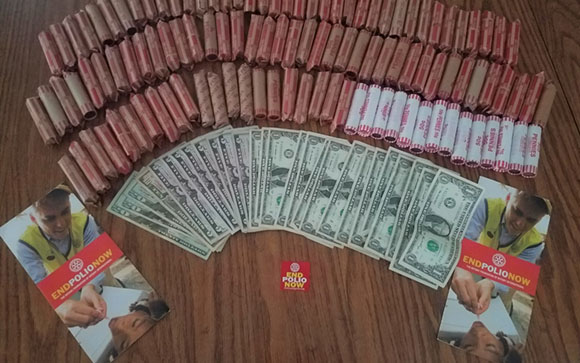 The New Bern Breakfast Rotary club recently collected $450 in a special “Pennies for Polio” campaign to recognize World Polio Day on October 24, 2019.  When matched by the $2 for every $1 challenge from the Bill & Melinda Gates Foundation, the club’s total final contribution to Rotary International’s End-Polio-Now effort was $1350. 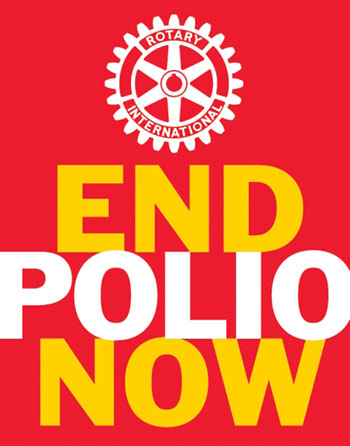 “We are absolutely delighted and proud of how our members responded to this unique fundraising effort toward ending polio in our world,” said President Dwight Carlblom. “Our original goal was 200 rolls of pennies for $100, so the campaign obviously far surpassed that target.” A total of 126 rolls of pennies, rolls of other coin, cash, and checks were collected at the club’s weekly meetings over a six-week period leading up to World Polio Day.

In 1985, there were more than 125 polio endemic countries in the world where the disease killed or crippled more than 1,000 people a day, most of them children. Rotary launched PolioPlus that year, a multimillion-dollar campaign to immunize the world’s children against polio. Since then, Rotary and its partners, the World Health Organization, UNICEF, the U.S. Centers for Disease Control and Prevention, and more recently the Bill & Melinda Gates Foundation, have staunchly led the Global Polio Eradication Initiative. Rotary has helped to immunize more than 2.5 billion children, mobilized public support for ending polio around the globe, contributed over $1.5 billion to the effort, and helped to solicit financial support from donor governments resulting in over $10 billion in additional contributions. Polio cases have dropped 99.9% from 350,000 in 1988 to fewer than 100 a year today. The disease currently remains endemic in only two countries, Afghanistan and Pakistan, and Nigeria is working toward the three-year mark of being free of new cases.

Although tremendous progress has been made, the world is not yet polio-free or without the risk of new outbreaks. The poliovirus knows no borders and can spread from an endemic country to a polio-free area. Without immunization, no child is safe from this crippling, sometimes fatal, disease as long as one case of polio remains in the world. Rotary, and its partners, are “this close” to making polio the second human disease – after smallpox – to be eradicated. “Rotary continues to be the heart and soul of polio eradication, so supporting the program directly while also taking on a larger role in encouraging other donors to give more is our objective,” stated Bill Gates, Co chair of the Bill & Melinda Gates Foundation.

For more information, or to contribute to PolioPlus, contact Deedra Durocher, Foundation Chair of the New Bern Breakfast Rotary Club via email.