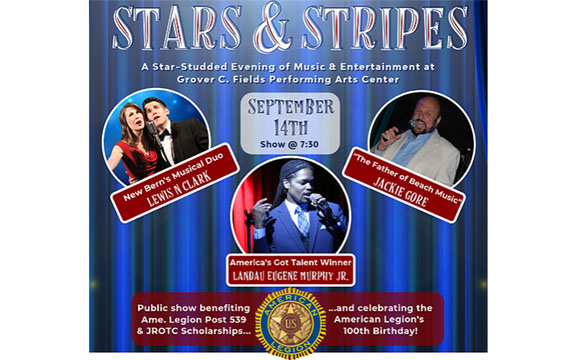 Excitement is building up for one of the most anticipated musical events of the year, which will be packed with unbelievable talent, as well as a celebration of the American Legion’s 100 patriotic years of service to our veterans.

“Stars & Stripes”​ will be a night of tunes through the decades benefiting American Legion Post No. 539 in New Bern and Craven County ROTC scholarships, bringing the likes of ​Lewis n Clark​, ​Landau Eugene Murphy Jr.​ and Jackie Gore. Murphy, a West Virginia native, is best known for winning the 2011 season of “America’s Got Talent” for his Frank Sinatra-inspired singing style. Gore is considered the father of the Beach Music genre, as he was a founding member of The Embers. Miss North Carolina 1972 Connie Dorn Rist, who performed in classic USO shows, and Washington, N.C. comedian William White will co-host the event.

The show was spearheaded by crooning couple Lewis n Clark, made up of New Bern residents Abbey Clark Lewis and Von Lewis, with their manager, Bill Stafford of ​Stafford Entertainment And Talent​. “Lewis n Clark is revving up for the show and reeling off the birth of our new baby boy,” Clark said. “And now getting to perform with the ‘Father of Beach Music’ [Jackie Gore] is another check on the bucket list.” Murphy said he and his band are ecstatic for their first ever show in New Bern after seeing buzz about the concert online. “I know from our website and social media there are lots of folks in that whole area who have been following me since I won ‘America’s Got Talent,’ and I’m looking forward to meeting each and every one of them and thanking them for all their support through the years,” he said. “It’s changed my life, and I’m so grateful.” Murphy’s manager Burke Allen said he admires “world class” talents Lewis n Clark and Stafford for their hard work organizing the concert. “I hope people in New Bern realize what incredible performers they have right there in their backyard,” Allen said. “​You put those guys on stage with one of the great voices of his generation, Landau Eugene Murphy Jr. — who is so strong that he won America’s Got Talent by a huge margin — and you’ve a show that is as strong, or stronger, than any Las Vegas showroom.”

“After meeting Landau in Atlantic City, we were thrilled to join him for a few of his touring shows in West Virginia and Alabama,” Lewis said. “New Bern is going to fall in love with Landau’s performance. He is a superb and charming entertainer whose comical timing is spontaneous and genuine everytime. We look forward to our New Bern show and doing many more with Landau and his team!” Finding a way to help veterans is a cause near and dear to the performers’ hearts, including Murphy’s. “Any opportunity we get to work with veterans and support them is a real blessing, so I am really counting down the days till we get there,” he said.

There will be a photo opportunity with the artists and merchandise available after the show. Tickets are available for $25 (cash or check only) at Carolina Creations, for $25 at the door, and for $27 online at ​https://www.staffordentertainmentandtalent.com​.