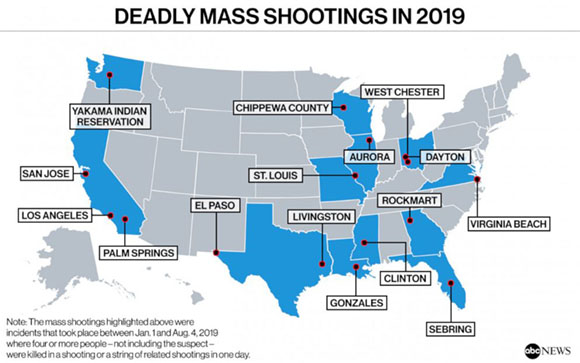 For ten years, New Bern Now has been a place to discover all the great things that our community has to offer, but today, I can’t stay silent. Not after two more mass shootings that ended the lives of 31 people and wounded 38 others… all within 13 hours of each other in El Paso, TX, and Dayton, OH.

Honestly, I don’t know how mass shootings have become a norm in America. It is “Domestic Terrorism”! Terrorism is Terrorism and I don’t know why our lawmakers haven’t done anything. After these horrific killings, they get on the news and pray for victims and their families, but then the news cycle changes, and it seems like nobody cares until it happens again!

The only things that are really happening is the “Great Divide” in our country and the increase in hate speech. I believe in prayer, but it won’t stop the hatred and the shootings. It’s just crazy. Something has to change.

I’ve done a lot of research on the cause of bigotry and racism. I’m not an expert by any means. Although, I do believe that unconscious judgments and associations have a lot to do with influencing people to form attitudes and/or stereotypes that we’ve learned through our personal life experiences, from our parents or friends, and/or from things we read through media channels – we’re only human and we all have them. It doesn’t give us the right to harm anyone because we don’t like their race, ethnicity, gender, sexual orientation, etc.

With so much information bombarding us through social media, news sources, stories from friends, I ask you to be aware of false narratives. Please take the time to research the source before misinformation leads you down a path of believing biases and stereotypes that you may not have previously had. Ask yourself if someone you know is going through a vulnerable time their life. Do they feel like they don’t matter? Are they angry, unstable, and have access to weapons? What are the signs or behaviors? Here’s A Study of Pre-Attack Behaviors of Active Shooters in the U.S. released by The Federal Bureau of Investigation.

Before I continue, please know that this article is about humanity and doing the right thing. It’s not about politics. Everyone has the right to their opinion. That’s what makes our country the leader in free speech.

Here’s a short story about unconscious bias that I experienced as a kid:

My parents grew up during the Great Depression and they learned societal norms from their parents. They went to one church, they had the same friends, and the only time we ever experienced the world beyond our small town, was during family vacations; either camping, visiting relatives, or places that were predominately white.

When other girls were wearing jeans to school, I had to wear dresses that my Mom helped me sew from McCall’s patterns. Kids made fun of me, but I made light of it until a new student came to school in the fifth grade…she was one of the nicest and smartest kids I ever met. She was the first black girl in our class and the other kids bullied her. I didn’t get it. She was smart, an awesome athlete, and very kind. What was their problem? I honestly thought it was because the boys were intimidated by her height. Fast forward 7 years and everyone loved her!

Why? Because they got to know her. I believe it was because she was the first black person in our class and eventually, she ended up being a dear friend to the majority of my class. That’s all it really takes is getting to know someone to breakdown unconscious barriers. That was in the 1970’s.

I’ve never understood racism because I believe that we all bleed red. Spending 22 years in the Navy, skin tone or other discriminatory factors didn’t matter. We were a second family and every one of the people I got to know have made me a better person for knowing them.

It all boils down to having a moral compass. I believe in treating people the way I want to be treated and everything will work out.

It’s the same belief as the Bible verse: Mark 21:31 – ‘Though shalt love thy neighbor as thyself’.

I know that it may be difficult for some people to step outside your comfort zone and daily routine. I feel it makes us stronger to interact with people we may not have regular contact with. It may change your unconscious perception of others and who knows what friendships could be formed.

Here’s some more facts from the FBI’s website: Active Shooter Incidents in 2018.

There have been over 5,000 research studies of Unconscious Bias identified through the San Francisco of Diversity and Outreach and Clinical and Transitional and Science Institute have developed a website to educate individuals on this important topic.

Please share your thoughts via email or let us know if you have any questions by calling 252-259-6853!