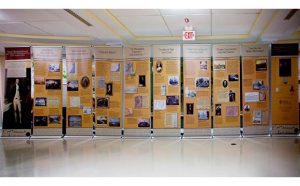 Tryon Palace will host a traveling exhibit “Your Obedient Servant: James Monroe’s 1819 Presidential Tour of the Southern States,” July 9 – 28, 2019, in the North Carolina History Center. This exhibit is on loan from the James Monroe Museum in Fredericksburg, Virginia, and will be on display free to the public in the Gateway Gallery in NCHC.

According to the James Monroe Museum, this traveling exhibit commemorates the bicentennial of President Monroe’s southern tour, highlighting his visits from Virginia south to North Carolina, South Carolina, Georgia, and Alabama, and west to Tennessee, Kentucky, and Indiana.

Modern-day presidents are readily recognizable by almost every American. This was not true 200 years ago. Monroe’s predecessors rarely traveled, and there was – of course – no mass media continually broadcasting the president’s image or the sound of his voice. Monroe’s 1819 tour was a follow-up to his highly successful northern tour in 1817. Americans came out by the thousands, thrilled by the opportunity to see the president, and newspapers across the country gave day-by-day accounts of his progress. Political differences were forgotten as Americans of both parties joined together in a grand celebration of the presidency, marked by parades, speeches, dinners, balls, receptions, and concerts.

This exhibit is free to the public and included in a One Day or Galleries pass.