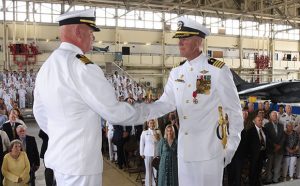 Rear Admiral Terry Moulton, Deputy Surgeon General, Deputy Chief, Bureau of Medicine and Surgery and presiding officer said, “Capt. Woelkers, you have done an absolutely phenomenal job focusing on readiness and access to care. Now as you move on to your new command, you will continue to develop future Navy leaders. I can’t think of a more qualified officer.

“Capt. Stephens, I have every confidence in your skills and proven track record. I know you’ll do a great job here at Cherry Point.”

Moulton then presented Woelkers with the Legion of Merit for his tour at NHCCP.

In his remarks, Woelkers thanked his family for his success and recognized several NHCCP staff members for their help during his tour. He also spoke about how important the Navy Medicine Marine Corps team continues to be and told Capt. Stephens, “You are inheriting a five-star crew.”

Stephens said, “I’m excited about taking command of NHCCP. My priorities were and will always be taking care of Sailors, Marines, their families and beneficiaries.