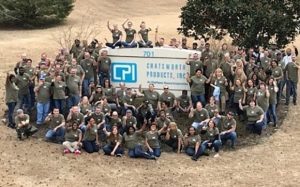 Made possible by state and local grants totaling $240,000, the expansion is expected to create 15 new jobs and attract nearly $750,000 in private investment.

By expanding its New Bern facility, which is located in the Craven County Industrial Park and home to over 150 CPI employee-owners, CPI can now better serve the needs of customers with enhanced access to CPI products, faster delivery time and overall more cost-effective solutions. Additionally, local customers can now easily experience the innovation, function and performance of CPI’s breadth of products and solutions.

“CPI is extremely excited about this expansion. It is the next step in sustaining the global and national growth the company has experienced, and will help us more efficiently provide customers with the high-quality product selection they deserve,” says Marisa Game, CPI New Bern Site Plant Manager.
CPI is also highly active in the local New Bern community, partnering with reputable organizations such as the American Red Cross and Religious Community Services, as well as an active participant in Toys for Tots and various fundraising events for New Bern schools.

As part of its commitment to giving back to the local community, CPI is also honored to be unveiling its very own “Technology Bear,” which will reside outside the CPI facility and become the newest member of New Bern’s Bear Town Bears, which are scattered throughout the community, each with a unique design representative of its hometown sponsor.

The CPI Technology Bear was designed to illustrate the vital role that CPI plays in helping protect the technology investments that help the world stay digitally connected, with a series of connectivity lines symbolizing a globally connected world, a number of recognizable icons for the devices, apps and social media channels that symbolize the tools that make such connectivity possible, and depictions of CPI employee-owners working together to help plug into Chatsworth Products.

Members of the local business community and media are invited to attend the May 21 official grand opening of CPI’s New Bern facility expansion and Technology Bear reveal by sending RSVPs to Shelia Murray via email.