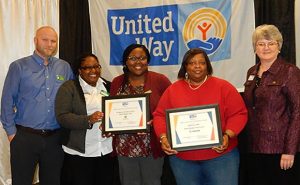 United Way recognized Publix Store #1533 in New Bern, Publix Store #1623 in Emerald Isle, and MOEN, Inc. in New Bern as Campaign Champions for their United Way giving campaigns as well as their community outreach efforts throughout the year. Curtis Media Group was named Media Partner of the Year. Shawn Black Herring and Black Insurance Services received the Business Partner of the Year. The Community Spirit Award went to James “Smoke” Boyd of The Flame Catering. The Volunteer of the Year award was given to Tara Dickson of Weyerhaeuser Timberlands and Chuck Dale received the United Way Board Member of the Year award. 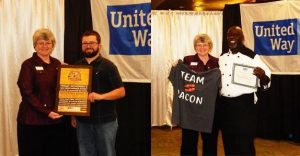 Chuck Dale receives Board Member of the Year, Shawn Black Herring of Allstate Black Insurance Services accepts Business Partner of the Year, and Tara Dickson with Weyerhaeuser Timberlands is Volunteer of the Year.

Hurricane Florence Long Term Recovery groups in Carteret, Craven, Jones and Pamlico Counties were also recognized for their efforts to repair the storm damaged homes of individuals and families.

Executive Director Sandra Phelps states, “Since 1957, an amazing $19 million has been raised from compassionate citizens through the annual United Way of Coastal Carolina (UWCC) campaign. There is a spirit of giving that is prevalent throughout our community.”

Submitted by: The United Way of Coastal Carolina