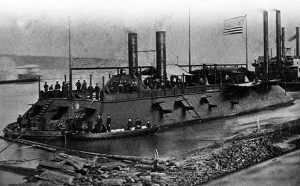 It’s a treasure hunt story worthy of Indiana Jones, led by historian Ed Bearss. On Dec. 12, 1862, naval history was made when the Union ironclad USS Cairo (pronounced “KAY-row”), involved in the campaign against Vicksburg, was sunk in twelve short minutes in Mississippi’s Yazoo River. It was reportedly the first armored ship sunk by a remotely detonated mine. The gunboat lay largely forgotten for 98 years until a group led by Ed Bearss, then Vicksburg National Military Park Chief Historian, discovered the hulk resting on the bottom of the river north of Vicksburg.

On Sunday, January 13, at 2 pm at the North Carolina History Center, the now 95-year-old Chief Historian Emeritus of the National Park Service, Ed Bearss will recount the raising of the Cairo. The story of the difficult salvage operations and its final restoration, in Ed’s words “how not to raise an ironclad” is a story only Ed can tell with his characteristic humility and humor.

A Marine Corps veteran of WWII injured at Suicide Creek, Ed Bearss is a renowned military historian, an author known for his work on the American Civil War and World War II eras, and a popular tour guide of historic battlefields for The Smithsonian Associates. A respected PBS commentator, Bearss was one of the stars of Ken Burns’ award-winning PBS TV series “The Civil War.” After many years as a historian with the National Park Service, he served as Chief Historian and is now Chief Historian Emeritus.

Bearss has led thousands of unique tours of historic sites associated with the Civil War, the American Revolution, World War I and World War II in Europe, Abraham Lincoln’s assassination, and the American West. He has been named by Smithsonian Magazine as one of the “35 Who Made A Difference,” along with the likes of Maya Angelou, Steven Spielberg, and Sally Ride. Don’t miss the opportunity to hear this icon.

Bearss was instrumental in researching and planning the restoration of New Bern’s Civil War Battlefield Park. This will be his thirteenth visit to New Bern.

Reservations are recommended and can be made with a suggested $10 donation, with all proceeds going to help with extensive hurricane repairs at New Bern Civil War Battlefield Park. A reception will follow the presentation. This lecture is presented by the New Bern Historical Society and the New Bern Civil War Round Table in partnership with Tryon Palace.

The mission of the New Bern Historical Society is to celebrate and promote New Bern and its heritage through events and education. Offices are located in the historic Attmore-Oliver House at 511 Broad Street in New Bern. For more information, call 252-638-8558 or go NewBernHistorical.org or Facebook.com/NewBernHistoricalSociety.