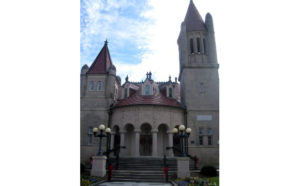 James Ogle, conductor, will return to New Bern for the thirty-sixth performance of George Frideric Handel’s Messiah, set for Monday, December 10 at Centenary United Methodist Church, on the corner of New and Middle Streets. An Open Rehearsal will be held at 3:00 p.m. and a performance at 7:30 p.m.

Begun in 1981, the performances have featured a 135-member chorus from the surrounding area, including Beaufort, Craven, Carteret, Jones, New Hanover, Pamlico and Wayne counties. Accompanying the singers will be an orchestra composed of members of the North Carolina Symphony, many of whom have returned to New Bern each year for this occasion. The production is sponsored by the Craven Messiah Chorus, an organization originally founded by Centenary United Methodist Church, Christ Episcopal Church, First Baptist Church, and First Presbyterian Church. Co-directors of the Craven Messiah Chorus are B.J. Oglesby and Pat K. Rowlett.  For information, phone Pat Rowlett at 637-3270.