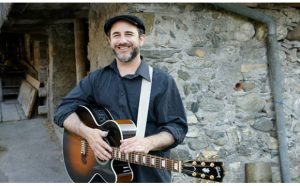 Durham, NC based songwriter and guitarist Jon Shain performs at the new City Stage in New Bern, Fri. Sept. 14, for an intimate folk-blues concert. The award-winning songwriter and acoustic picker is touring in support of his brand new CD release “Gettin’ Handy with the Blues”, which had its roots in a WC Handy tribute concert that Shain played for the Craven Arts Council last fall. Jon recently won the 2018 Triangle Blues Challenge. Expect to hear some serious fingerstyle guitar-picking and spontaneous riffing.

Jon Shain had the good fortune to learn directly from a number of NC’s older blues players, and became a member of Big Boy Henry’s backing band. Jon is a knowledgeable, articulate and fiery fingered entertainer. He can turn out fine versions of country blues classics, but especially shines when playing his own memorable songs. He played the inaugural Down East Folk Festival in New Bern along with Lightnin’ Wells and Tillamook Burn, and his music is often featured on Public Radio East’s The Sound program.

Shain was a finalist in the 2009 International Blues Challenge in Memphis and is the 2008 winner of the Triangle Blues Society’s Blues Challenge and 2006 winner of NC’s Indy award for Best Folk Act. He has shared stages with the likes of Keb’ Mo’, John Hiatt, and Jackson Browne.

For review copies of Shain’s new CD and for interviews, please send an email.