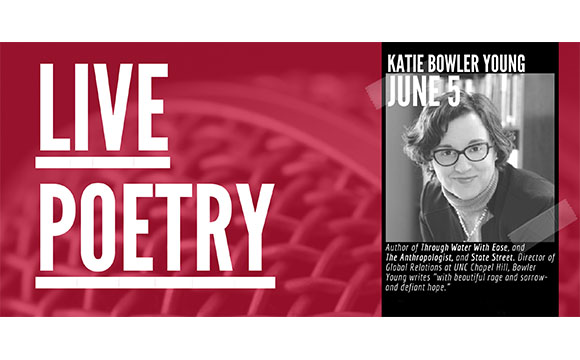 Katie Bowler Young will be the Featured Poet at the Nexus Poet’s Poetry Open Mike at 7:30 p.m., Tuesday, June 5 at the Arts and Wellness Center located at 919 Broad St in New Bern.

Katie Bowler Young, author of State Street (Bull City Press, 2009), will read from her recently finished manuscript Through Water with Ease, about Hurricane Katrina and the loss and restoration of home and homeland. Katie will also read from her new literary montage, The Anthropologist, which is part poetry, prose, drama, letter, and even road signage, connecting a year-long road journey across North America, acts of storytelling, bicycling, higher education, and the U.S. prison system. It is framed by a dialogue between a poet and an anthropologist.

Kentucky poet Maurice Manning described Katie’s State Street this way. “A house with a tricycle perched on its roof. A man whose life’s work lies stuffed into garbage bags. ‘In the middle of this little hell,’ Katie Bowler tells us, ‘I find a photo of a banjo.’ These are the rare, unbroken things suddenly turned to relics, haunting proof that New Orleans remains a living city. State Street is a poem of beautiful rage and sorrow; it is also in its very making a poem of defiant hope.”

Katie is also author of Enrique Alférez: His Life and Art (forthcoming, The Historic New Orleans Collection). She has published poetry and prose in The Southern Review, Carolina Quarterly, The Arkansas Review: A Journal of Delta Studies, Louisiana Literature, and other literary journals, magazines, and newspapers. Katie is director of global relations at the University of North Carolina at Chapel Hill, where she also leads an internship program in which students produce Carolina Passport, a magazine about international education.

After the Featured Poet reads, the mike is open for original poems from other poets who sign up. The Arts and Wellness Center is located at 919 Broad St. in New Bern. This is a free event sponsored by the Nexus Poets, a group of Eastern North Carolina poets promoting poetry in the area.