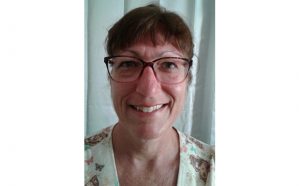 CWF’s mission is to provide New Bern area women of all ages and walks of life with opportunities for networking, support and encouragement. In keeping with this 30-year-old commitment, the organization has chosen Christine Elliot as the winner of its second annual scholarship, awarded to a Craven Community College, (CCC) student.

Christine grew up in small-town Minnesota. As a high school senior, she realized college was out of the question for financial reasons. When a ROTC recruiter came to her school, Christine saw her opportunity and took it.

Upon graduation, Christine began her 20-year career in the United States Navy at boot camp in Pensacola, FL. While in the Navy, she not only served her country, she met and married her husband, Steve, had three sons and moved every three years. Eight of those years were spent overseas in diverse locations such as Spain and Iceland.

Christine says her biggest take-away from her naval career is that, “People are people. No matter what color, what shape their eyes, no matter how tall or short, people are people.”

Because of the experiences she and her family embraced in their host countries, Christine has a low tolerance for discrimination because of religion, physical appearance and language. She treasures the friends she made and the opportunity to meet people from other cultures. The family learned how to adapt. “Instead of fighting something new,” she explained, “we chose to enjoy and learn.”

When Christine retired from the Navy in Washington State, the Elliot’s realized they had no family on the west coast. So, they moved to Massachusetts to be with Christine’s mother and sister. No doubt the fact that her middle son was at West Point, four hours away, helped in the decision to move cross-country

After three years, it was time to move on. The family traveled around in a camper for the next four years. During the time they spent in Tennessee, Christine and Steve decided to put down roots somewhere near the water. They discovered New Bern and were impressed by how much there was to do.

In 2014, Christine and Steve began their life in New Bern at a KOA camp site. It wasn’t long before Steve was offered a job at the KOA. Christine then made the decision to improve her job prospects by going back to school to earn a degree.

Despite her 20 years in the Navy and the supervisory administrative and managerial skills she had acquired – not to mention her security clearance – employers consistently passed her over because she lacked a college degree. “It sounded wonderful on paper,” Christine recalled, “and I did well in the interviews.” But not having that piece of paper put her at a clear disadvantage every time.

Christine has now completed her two-year program at CCC in the Applied Sciences area. She will go on to finish her degree online through Wesleyan University, which includes one night a week in class at CCC. Her focus is on a career in Business Administration, specializing in Human Resources. She is passionate about working in this field because of the opportunity it affords to help others.

While searching the CCC website for scholarship opportunities, Christine came upon the one offered by CWF in conjunction with CCC. The organizations values were in line with hers, so Christine applied, and the rest, as they say, is history.

Since 2017-2018, CWF has awarded its annual scholarship to a female CCC student,25 years of age or older, who is in need of financial assistance in order to continue her education. As this year’s scholarship recipient, Christine will receive $2,000 through CCC, a one-year CWF membership, and she will be hosted at every meetings she attends throughout the year.

For more information about the annual scholarship and other opportunities offered through CWF, visit the website at CoastalWomensForum.com