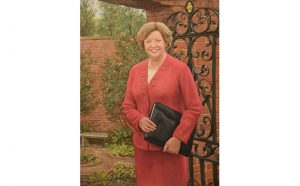 The portrait will be on display in the North Carolina History Center beginning May 4.

Williams served as Executive Director of Tryon Palace for 30 years. She provided leadership for the Palace’s first Capital Campaign, raising more than $60 million to design and construct the North Carolina History Center, which opened in October 2010. William died in her home in New Bern on October 14, 2012; she was 69 years old.