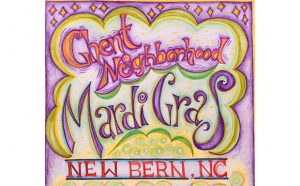 The historic Ghent Neighborhood in New Bern is hosting its Fourth annual Mardi Gras parade and festival on Saturday, March 3th from noon until 5pm.

The parade will be led again this year by the 2nd Marine Aircraft Wing Band and begins at 2pm, with festivities and parade line-up beginning at noon on the 1400 block of Spencer Avenue.

This year’s parade and festivities will feature the Craven Brass Quintet, the Antique Car Club, and Jonkonnu. Musicians include Alisa Mike, Middle Street Jazz, and Junkroad Crossing, and will be joined by vendors including Brewery 99, The Tiny Tornado food truck, and more.

After the parade, the festival will continue until 5pm on Spencer Avenue on the 1500 and 1600 blocks between Third and Fifth Streets, and will feature food, live music, performers, and vendors.

All ages are welcome and encouraged to dress in costume.

For more information and to register for the parade visit NewNernMardiGras.com or call Pam at 252-637-5281.